Cycling is a sport in constant evolution and everesting is a prime example of it. This challenge, officially created a few years ago by the guys of the Australian team “HELLS 500”, consists of reaching or exceeding 8,848 metres of elevation gain in the saddle of a bike, without stopping. The figure just mentioned corresponds to the altitude of the summit of Mount Everest, the highest mountain in the world, from which this challenge gets its name.
The everesting endeavour has spread rather quickly through the world, to the point that in Italy alone hundreds of attempts have already taken place, the first of them being finally approved and registered on the 18th of July 2012. On that occasion, cyclist Carlo Gironi rode the Valcava climb ten times in a row, reaching a total of 9,011 metres of elevation gain.
The first, successfully approved and registered challenge, however, dates back to the 1st of November 1994, when George Mallory, the grandson of the legendary mountaineer with the same name – who lost his life on Everest in 1924 – managed to tackle the frightening elevation gain of 10,840 metres on Mount Donna Buang, in Australia.
Sarah Hammond has been the first woman to accomplish the feat when, on the 28 of February 2014, stacked up 8,902 metres of climbing on Mount Buffalo, in Australia. Paola Macedo would be, later on, the first Italian lady to emulate such a sporting achievement: on the 23rd of April 2017, she climbed 8,908 metres by bike on Ghimbegna pass, in Liguria.
Among other records, it is worth mentioning that it has been an Italian rider, Zico Pieri, to climb the greatest elevation gain ever: 35,395 metres in 113h18’ on Monte Petrano in the Marche region, in June 2019. Mats Steinsland, however, did everest on a climb boasting an average gradient of 36.84% near Bergen, according to the data provided by the everesting.cc website.

Paolo Laureti, Elastic Interface®’s ambassador, began thinking about this difficult challenge a few months ago, as a step of his preparation to the Silk Road Mountain Race (the extreme bikepacking event that takes place in Kirghizistan).
Well used to long distances, he chose Lanciano pass (from Pretoro to Rifugio Pomilio) as the perfect theatre for his feat, with the intention of repeating the climb seven times.
He departed on the 31st of May at 7:30 a.m. in very poor weather conditions and, after hours and hours of massive effort, he concluded his challenge the following day at 2:50 a.m.
Paolo, at the end of the seventh ascent, had been riding over a distance of 276 km during 21h28’, totalling 9,318 metres of elevation gain. He officially entered the prestigious Hall of Fame of Everesting Italy.
Before heading to the Silk Mountain Race, Paolo will pay a visit to us and he will also take part in “Lost In Prealps”, a trail event to discover Veneto region’s Prealps. 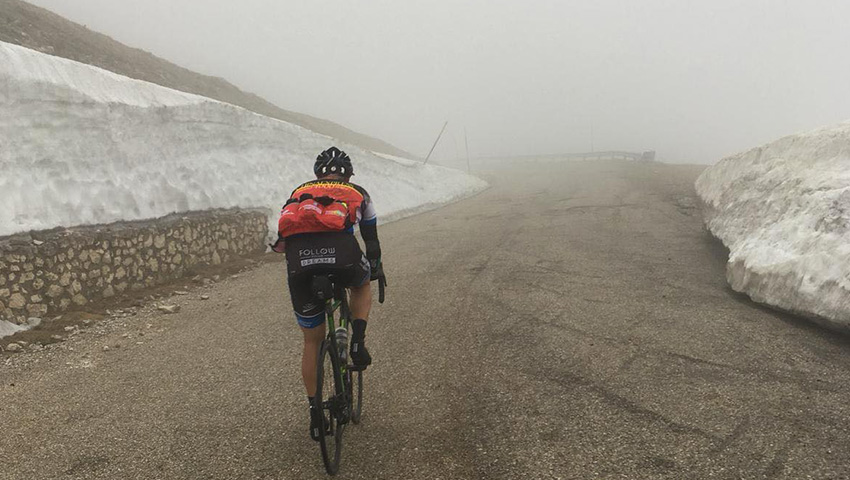